Prices from large companies as well as small ones in Brazil

Compare prices on car rental in the whole of Brazil with online booking. Through our search engine you can book a rental car in 3 simple steps. A car rented from us is free from surprises when you pick up the car. All our prices include airport fees, free mileage and necessary insurances, local taxes and fees. Let us help you find rental cars in Brazil online. Good prices on luxury, family and economy cars. If you only want to rent a cheap vehicle from a specific agency of your choice, you can choose that when you do your search.

Tips and advice on renting a car in Brazil

Here we have put together some tips on what to consider when looking for a rental car in Brazil and regions/states such as São Paulo, Minas Gerais, Rio de Janeiro, Bahia, Rio Grande do Sul, Paraná, Pernambuco, Ceará, Pará and Maranhão.

Extra driver? If more than one person is driving the car, this must be stated at the time of booking or at the company upon arrival. Remember that there may be restrictions on driving the car to other countries and taking the car from or to islands such as Santa Catarina Island, Santo Amaro Island, Island of Saint Sebastiao and Ilha de Itamaracá.

Review and read the rental conditions before booking the rental car. autoprio.com offers rental cars from several different rental car companies and the conditions differ between the different companies. Smaller companies may have administrative fees to be paid on site that relate to refueling after return. Any fees are stated during the booking. Review and read the contract when you pick up your rental car. autoprio.com offers cheap rental cars from several different rental car companies in Brazil and the contract differs between the different companies. If there is something you do not understand in the contract, ask someone from the company on site or contact us directly.

Inspect and examine the rental car when you pick it up. Check that all damages, scratches and dents are included in the condition report. Check how big the deductible is! What often differentiates between smaller, cheaper companies in Brazil and larger global companies is the amount of the deductible. Also read the conditions carefully when it comes to how the car is to be returned. Smaller local companies may have an administrative fee if the car is to be returned with an empty tank. Any fee is stated in our terms and conditions when you apply.

Which costs are included in the rental price in Brazil?

In the majority of cases the rental price includes collision damage waiver, unlimited mileage, airport fee, tax, breakdown assistance and third party liability protection. Please note that the costs included may vary depending on the car rental company and destination. The car hire company may also choose to ask you for a deposit or excess at the rental desk in Brazil. Make sure to check the rental conditions at the time of booking at Autoprio.com.

How much do you charge for excess in Brazil?

Can I book without a credit card in Brazil?

Yes. You can make a booking without a credit card with Autoprio.com in Brazil. Note that, even if you choose to pay by debit card, you will have to provide a valid credit card in the driver’s name at the time of pick-up since the rental agent requires a credit card from which to take the rental deposit. Credit cards accepted for pick-up are MasterCard, Visa, and in some cases American Express.

What is the cheapest car rental company in Brazil?

What are the most popular car rental locations in Brazil?

Are there any cross-border charges if you want to leave Brazil?

The car rental agents like Sixt, Europcar, Thrifty, Hertz, Avis, Budget and National may choose to charge you for cross-border travel. Any fees will need to be paid at the rental desk in Brazil in local currency. We will state whether cross-border travel is allowed and in which countries at the time of booking under rental conditions at Autoprio.com.

What is the best rental car company in Brazil?

How old do you have to be to rent a car in Brazil?

How can I find car rentals near me in Brazil?

Do a search for the city, island or airport closest to you in Brazil. A search for country or e.g. island in Brazil lists the largest airports like Pinto Martins Fortaleza Airport, Salvador Airport, São Paulo-Guarulhos Airport, Rio de Janeiro-Galeão Airport, Manaus Airport, São Paulo-Congonhas Airport, Brasilia Airport, Santos Dumont Airport, Belo Horizonte Airport and Curitiba Airport. Then take a look at our map of cheap car hire companies to find the best rental cars near you.

Are there extra charges for drop-off at a different location in Brazil?

Yes, in most cases the car rental agents like Europcar, Sixt, Avis, Hertz and Budget will charge an extra fee if you wish to return the vehicle at a different location in Brazil. We will clearly state whether the one-way fee is included in the rental price or what additional cost may arise at the time of booking at Autoprio.com.

Do I need an international driver’s licence in Brazil? 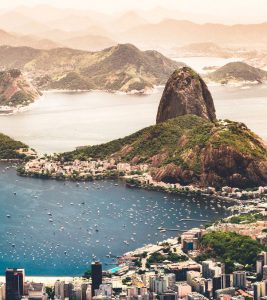 At our website, you can compare prices on rental cars and car rental from several companies in all cities in Brazil. Find the best prices for rental cars online. Search for and book a cheap car in cities such as, São Paulo, Rio de Janeiro, Salvador, Fortaleza, Belo Horizonte, Brasília, Curitiba, Manaus, Recife, Belém, Porto Alegre, Goiânia. We only list prices of rental cars from companies that are safe and quality assured so that there will not be any problems when you arrive.

We can offer car rental where every cost is included, no hidden fees and free cancellations or amendments up to 24-48 hours before you are supposed to pick up the car. An easy and safe booking of rental cars online. Autoprio.com can offer rental cars in the most cities, train stations and communities as well as airports in Brazil.

Brazil (Federative Republic of Brazil) is a country with approximately 201,103,000 inhabitants and is located in South America. Total surface/area 8,511,965 km² / 3,286,488 mi². It is the 1th largest country on South America when it comes to inhabitants and the 1th largest regarding its surface. The capital is Brasília which has 2,207,700 inhabitants. It consists of 27 regions/states/counties and the largest are São Paulo, Minas Gerais, Rio de Janeiro, Bahia, Rio Grande do Sul, Paraná, Pernambuco, Ceará, Pará, Maranhão, Santa Catarina, Goiás, Paraíba, Espírito Santo, Amazonas, Rio Grande do Norte, Alagoas, Piauí, Mato Grosso, Federal do Brasil, Mato Grosso do Sul, Sergipe, Rondônia, Tocantins, Acre, Amapá and Roraima. Brazil is the 5th largest country on when it comes to inhabitants and the 6th largest regarding the surface. Other names for this country is United States of Brazil, República dos Estados Unidos do Brasil, Brésil, Brasilien, Estados Unidos do Brazil, Brasíle, Brasil, Estados Unidos do Brasil, República Federativa do Brasil, Federative Republic of Brazil. Pico Phelps (2973 m / 9,754 ft), Pico da Bandeira (2890 m / 9,482 ft), Pedra da Mina (2798 m / 9,180 ft), Pico das Agulhas Negras (2791 m / 9,157 ft) and Pedra do Sino (2275 m / 7,464 ft) are the top five highest mountains of the country. The five largest communities are São Paulo (c. 10021300 pop), Rio de Janeiro (c. 6023700 pop), Salvador (c. 2711800 pop), Fortaleza (c. 2400000 pop), Belo Horizonte (c. 2373200 pop). To buy and make purchases, the currency Real (BRL) is used. +55 is the country code when you want to make a phone call to the country. .br is a common domain ending for websites. Neighboring countries are Suriname, Peru, Bolivia, Uruguay, Guyana, Paraguay, French Guiana, Venezuela, Colombia, Argentina. Is it included in the price to cross national borders? Usually not, the car rental company may charge a fee to cross national borders to Suriname, Peru, Bolivia, Uruguay, Guyana, Paraguay, French Guiana, Venezuela, Colombia, Argentina. All additional costs are paid directly at the rental desk in the local currency, Real (BRL). It is stated in the rental terms and during the booking whether it is allowed to cross national borders and to which countries. We give tips and recommendations on activities, experiences, attractions and destinations which you can visit during your stay in Brazil. See the weather reports and find maps. Common languages are e.g. French, Spanish, Portuguese, English.

Renting and driving a car is usually easy and effortless, but as in all countries there are many traffic regulations in Brazil you must follow. If you are going to visit and drive in large cities such as São Paulo, Rio de Janeiro, Salvador, Fortaleza, Belo Horizonte, Brasília, Curitiba, Manaus, Recife, Belém, Porto Alegre, Goiânia, prepare yourself for a lot of traffic, especially in rush hour and that it is sometimes difficult to find parking. Try to memorize the most common parking and traffic regulations before you leave to ensure that your car trip is safe, and to avoid trouble with the police.

What to consider when looking for a rental car in Brazil?