Price comparisons on rental cars in the city of San José, province San José, Costa Rica online. Search and book a car rental in three easy steps. Compare car rental companies like Hertz, Europcar, Avis, Enterprise, Payless, Budget, Alamo, Firefly, Mex, National, Green Motion, Thrifty, Dollar, Sixt, Keddy By Europcar, etc. When you look for, and book a car with us, there will be no problems when you pick up the car on arrival. The price includes free mileage, obligatory insurances and airport fees, local taxes and fees. Autoprio.com can help you search for rental cars.

Which car rental companies are near or in San José?

Do I need a credit card for car rental in San José?

You can make a booking without a credit card with autoprio.com. Note that, even if you choose to pay by debit card, you will have to provide a valid credit card in the driver’s name at the time of pick-up in San José, since the rental agent requires a credit card from which to take the rental deposit. Credit cards accepted for pick-up are MasterCard, Visa, and in some cases American Express.

How can I find car rental near me in San José?

Do a search for San José. Then take a look at our map of hire car companies to find the best rental cars near you in San José from companies such as Alamo on Contiguo A Claro Paseo Colón Paseo Colón, Sixt Downtown on Calle 43, Avis Sabana Norte on 75 Mts West of The Nissan Dealership On The North Side of la Sabana Park Las Américas Avenue, Budget on Paseo Colón Esquina Calle 30 Diagonal Al Ina, Dollar on Paseo Colon Ave 36 & 38 St, Adobe on Interplaza Local 18 Goicoechea, Thrifty, Payless on Paseo Colón and others.

What types of car can I rent in San José?

What is the cheapest car rental company in San José and Costa Rica?

In the past 14 days, the cheapest rental cars in Costa Rica on Autoprio.com were found at Firefly, Adobe, Easycar, Economy, U-Save, Apex, Mex and Green Motion. It is usually cheaper to hire a car in San José than at the airport. However, it often pays off to compare the price between the airport and nearby cities before booking.

What is the best rental car company in San José and Costa Rica?

Based on ratings and reviews on autoprio.com, the best car rental companies in Costa Rica are National, Avis, Hertz, Budget, Sixt, Europcar, Thrifty and Enterprise. The largest companies have offices in the city and at the airport.

Where can I park a car in San José?

Where are there gas and service stations in or near San José?

Are there extra charges for drop-off at a different location other than San José?

Yes, in most cases the car rental company will charge an extra fee if you wish to return the vehicle at a different location like airports such as Quepos La Managua Airport, San José-Juan Santamaría Airport, Tobías Bolaños Airport, Liberia Daniel Oduber Quirós Airport, Puntarenas Chacarita Airport, Limón Airport, Guapiles Airport and Puerto Jiménez Airport, instead of San José. Autoprio.com will clearly state whether the one-way fee is included in the rental price or what additional cost may arise at the time of booking.

Which additional charges could apply in San José?

Which optional extras are available in San José?

The availability of optional extras depends on the car rental agent in San José and even if they are booked online they are not guaranteed. The following extras can be booked on Autoprio.com: Additional driver, Roof Rack, Child toddler seat, Ski Rack, Luggage racks, Electronic toll pass, Booster seat, Snow Chain Set, GPS – Satellite Navigational System, Snow Tyres, Infant child seat and Wi-Fi Access. Please note that most of the optional extras are not included in the rental price and can be purchased at the time of booking or at the rental desk in San José. The cost of the optional extras are displayed at time of booking in the Rental Conditions. 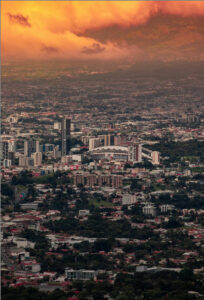 We compare large companies as well as small and find the best price for all types of cars. Compare rental cars and renting of a vehicle from several companies in the city, San José in Costa Rica.

Some suggestions and tips on places, activities, events, attractions, museums, experiences and destinations in the city that are worth a visit during your vacation in San José. Do you need a car for a golf trip? Golf courses close to the community are Valle del Sol 14 km (9 mi), Cariari Country Club 9 km (6 mi) and Costa Rica Country Club 7 km (4 mi). Interesting cathedrals or churches that are close by are Church of Curridabat. Want to look at the domiciles of the city’s old rulers? Exciting castles such as, Castillo de (Castle) Barva are located close to San José.