Prices from large companies as well as small ones in Granada

Price comparisons on rental cars in the town of Granada, region Andalusia, Spain online. Search and book a car rental in three easy steps. There are car rental companies such as Thrifty, Hertz, Avis, Budget, Sixt, Europcar and others. When you look for, and book a car with us, there will be no problems when you pick up the car on arrival. The price includes free mileage, obligatory insurances and airport fees, local taxes and fees. Autoprio.com can help you search for rental cars.

Which car rental companies are near or in Granada?

Do I need a credit card for car rental in Granada?

You can make a booking without a credit card with autoprio.com. Note that, even if you choose to pay by debit card, you will have to provide a valid credit card in the driver’s name at the time of pick-up in Granada, since the rental agent requires a credit card from which to take the rental deposit. Credit cards accepted for pick-up are MasterCard, Visa, and in some cases American Express.

How can I find car rental near me in Granada?

How much does it cost to rent a car in Granada?

Renting a normal-sized car in Granada costs from about € 31 per day, depending on the season and supply. A smaller car costs from about € 14 per day. Larger cars, luxury cars, vans and moving cars cost more. Sometimes you can find the cheapest hire cars depending on the season. In the majority of cases the rental price includes breakdown assistance, airport fee, tax, third party liability protection, unlimited mileage and collision damage waiver. Please note that the costs included may vary depending on the car rental company and destination country. The car rental company may also choose to ask you for a deposit or excess at the rental desk. Make sure to check the rental conditions at the time of booking. The price for the rental car shown is per day and is based on a all inclusive weekly rental for 7 days.

How much does it cost to rent a car for a week in Granada?

On average, a normal-sized rental car in Granada costs approx. € 217 per week (€ 31 per day). A smaller car costs from about € 98 per week. The offer can be changed or removed at short notice by the various rental companies. The price for the rental car shown is based on a all inclusive weekly rental for 7 days.

How much does it cost to rent a car long term for a month in Granada?

On average, a normal-sized rental car in Granada costs approx. € 868 per month (€ 31 per day). A smaller car costs from about € 392 per month. How much it costs to rent a car depends on the time of year, range of cars, country and what type of car you plan to rent. Do a search with Autoprio.com and easily find all current prices for hire cars right now.

What types of car can I rent in Granada?

What is the cheapest car rental company in Granada and Spain?

In the past 14 days, the cheapest rental cars in Spain on Autoprio.com were found at Orcar Canarias, Atesa, Autos Valls, Drivalia, Autos Menorca, TopCar, Canarias.com and AutoReisen. It is usually cheaper to hire a car in Granada than at the airport. However, it often pays off to compare the price between the airport and nearby cities before booking. In Granada you can find a rental car for € 14 - 31 per day depending on the size of the car and the season.

Where can I park a car in Granada?

Where are there gas and service stations in or near Granada?

How much does it cost to rent a minivan or cargo van in Granada?

How much does it cost to rent a minibus in Granada?

How much it costs to rent a 9-seater minibus in Granada depends on the time of year and the supply of buses etc. In Granada you can find a 9-seater minibus from about € 53 / day. Do a search with Autoprio.com and easily see all current prices for minibuses right now. The price for the minibus shown is per day and is based on a weekly rental for 7 days. The offer can be changed or removed at short notice by the various rental companies.

Are there extra charges for drop-off at a different location other than Granada?

Yes, in most cases the car rental company will charge an extra fee if you wish to return the vehicle at a different location like airports such as Seville-San Pablo Airport, Málaga-Costa del Sol Airport, Barcelona-El Prat Airport, Murcia-Corvera Airport, Gran Canaria Airport, Madrid-Barajas Airport, Valencia Airport and Zaragoza Airport, instead of Granada. Autoprio.com will clearly state whether the one-way fee is included in the rental price or what additional cost may arise at the time of booking.

Which additional charges could apply in Granada? 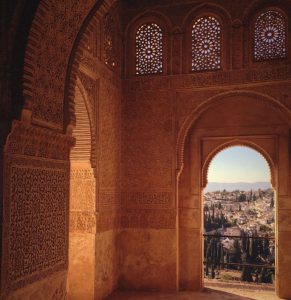 Compare rental cars and renting of a vehicle from several companies in the town, Granada in Spain. We compare large companies as well as small and find the best price for all types of cars.

Granada (Grenade, Granata) is a town in the municipality, Granada, Andalusia region, Spain. It is the central city in the area. 4th largest city/town when it comes to inhabitants in the region and the 24th largest district/town in Spain. Smaller communities, villages and suburbs nearby are Pinos Puente, Ogíjares, Salobreña, Churriana de la Vega, Huétor Vega, Alcaudete, El Albaicín, Sacromonte, Alcaicería de Granada, Realejo-San Matías and Cerrillo de Maracena. Whether you are visiting the town Granada just for one day or for a longer period, there is plenty to do. Read more further down. With about 234,300 (2018) inhabitants. Other larger cities/communities nearby are Vélez-Málaga (c. 74,200 pop), Motril (c. 60,300 pop), Almuñécar (c. 27,700 pop), Priego de Córdoba (c. 23,500 pop) and Alcalá la Real (c. 22,800 pop). The community and town is about 689 meters (2,260 ft) above sea level. Granada Bus Station and Aeropuerto Granada-Jaen are bus stations and stops nearby. These metro (subway) stations are located in the city Caleta, Estación Metro de Granada, Universidad, Recogidas, Méndez Núñez and Jaén. We also give tips on which companies offer rental cars in Granada.

Recommendations and tips on activities, experiences, museums, attractions, events, places and destinations in Granada you can visit during your stay in the town can be found here. Are you planning a wine tour and tasting in Spain? Vineyard and wine producers that are close by are Bodegas Castañeda, Señorío De Nevada and Señorio de Cubillas. Museums and art galleries in Granada that could be interesting are Hospital de la tiña, Cripta de Fray Leopoldo de Alpandeire, Museo José Guerrero, Museum of San Juan de Dios (Casa de los Pisa), Museum of Capilla Real, Carmen de los Geranios (Carmen de Max Moreau) and Aljibe del Rey Centro de Interpretación del Agua. Shopping at a mall? Maybe at Centro Comercial Alcampo, Centro Comercial Neptuno, Serrallo Plaza, Con sumo Cuidado, Centro Comercial Alameda, Centro Comercial Kinépolis and Nevada Shopping! Do your shopping and make some bargains at Alcaiceria, these are markets that are close by and well worth a visit.