Prices from large companies as well as small ones in Phoenix 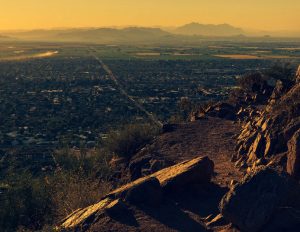 Find the best prices for rental cars online. Comparing prices online can be very profitable, many smaller companies can otherwise only be booked on site. Comparison of rental cars and car hires from several businesses in the city of Phoenix, USA.

Exciting antiquities, cultural heritage, ancient relics and older buildings that could be worth seeing are, Pueblo Grande Museum and Archeological Park and La Villa Hohokam Village historical. See archeological sites near Phoenix. Want to experience historical remains? Malls like Desert palm, Christown Spectrum Mall, Arizona Mills Mall and Desert Sky Mall are close by if you want to do some shopping.

Which car rental companies are near or in Phoenix?

Do I need a credit card for car rental in Phoenix?

You can make a booking without a credit card with autoprio.com. Note that, even if you choose to pay by debit card, you will have to provide a valid credit card in the driver’s name at the time of pick-up in Phoenix, since the rental agent requires a credit card from which to take the rental deposit. Credit cards accepted for pick-up are MasterCard, Visa, and in some cases American Express.

How can I find car rental near me in Phoenix?

How much does it cost to rent a car in Phoenix?

Renting a normal-sized car in Phoenix costs from about $ 23 per day, depending on the season and supply. A smaller car costs from about $ 13 per day. Larger cars, luxury cars, vans and moving cars cost more. Sometimes you can find the cheapest hire cars depending on the season. In the majority of cases the rental price includes breakdown assistance, airport fee, tax, third party liability protection, unlimited mileage and collision damage waiver. Please note that the costs included may vary depending on the car rental company and destination country. The car rental company may also choose to ask you for a deposit or excess at the rental desk. Make sure to check the rental conditions at the time of booking. The price for the rental car shown is per day and is based on a all inclusive weekly rental for 7 days.

How much does it cost to rent a car for a week in Phoenix?

On average, a normal-sized rental car in Phoenix costs approx. $ 161 per week ($ 23 per day). A smaller car costs from about $ 91 per week. The offer can be changed or removed at short notice by the various rental companies. The price for the rental car shown is based on a all inclusive weekly rental for 7 days.

How much does it cost to rent a car long term for a month in Phoenix?

On average, a normal-sized rental car in Phoenix costs approx. $ 644 per month ($ 23 per day). A smaller car costs from about $ 364 per month. How much it costs to rent a car depends on the time of year, range of cars, country and what type of car you plan to rent. Do a search with Autoprio.com and easily find all current prices for hire cars right now.

What types of car can I rent in Phoenix?

What is the cheapest car rental company in Phoenix and USA?

In the past 14 days, the cheapest rental cars in USA on Autoprio.com were found at Advantage, Pacific Rent A Car, Mex, Goldcar, Hertz Dream Collection, addCar, State Van Rental and U-Save. It is usually cheaper to hire a car in Phoenix than at the airport. However, it often pays off to compare the price between the airport and nearby cities before booking. In Phoenix you can find a rental car for $ 13 - 23 per day depending on the size of the car and the season.

What is the best rental car company in Phoenix and USA?

Based on ratings and reviews on autoprio.com, the best car rental companies in USA are Sixt, Hertz, National, Enterprise, Budget, Thrifty, Avis and Europcar. The largest companies have offices in the city and at the airport.

Where can I park a car in Phoenix?

Where are there gas and service stations in or near Phoenix?

How much does it cost to rent a minivan or cargo van in Phoenix?

How much does it cost to rent a minibus in Phoenix?

How much it costs to rent a 9-seater minibus in Phoenix depends on the time of year and the supply of buses etc. In Phoenix you can find a 9-seater minibus from about $ 26 / day. Do a search with Autoprio.com and easily see all current prices for minibuses right now. The price for the minibus shown is per day and is based on a weekly rental for 7 days. The offer can be changed or removed at short notice by the various rental companies.

Are there extra charges for drop-off at a different location other than Phoenix?

Yes, in most cases the car rental company will charge an extra fee if you wish to return the vehicle at a different location like airports such as Chicago O'Hare Airport, LaGuardia Airport, William P Hobby Airport, Philadelphia Airport, Chicago Midway Airport, Houston-George Bush Airport, John F. Kennedy Airport and Los Angeles Airport, instead of Phoenix. Autoprio.com will clearly state whether the one-way fee is included in the rental price or what additional cost may arise at the time of booking.

Which optional extras are available in Phoenix?

The availability of optional extras depends on the car rental agent in Phoenix and even if they are booked online they are not guaranteed. The following extras can be booked on Autoprio.com: Child toddler seat, Roof Rack, GPS – Satellite Navigational System, Booster seat, Snow Tyres, Additional driver, Electronic toll pass, Luggage racks, Ski Rack, Infant child seat, Wi-Fi Access and Snow Chain Set. Please note that most of the optional extras are not included in the rental price and can be purchased at the time of booking or at the rental desk in Phoenix. The cost of the optional extras are displayed at time of booking in the Rental Conditions.

Which additional charges could apply in Phoenix?

Search tips in Phoenix on Autoprio.com!

Search for a city or an airport in USA and choose your destination from the list. If you search for a country or an island, auto suggestion will list the largest airports in that country. Search and book in advance in Phoenix if you want an extra-large car and/or extra options such as GPS, roof rack, booster seat, kids seat, tow hitch and infant car seat etc. It is also possible to rent a car in Phoenix for one way drive, called a one way rental. You collect the car in one place and return it somewhere else, e.g. another city or country.

Here you can compare prices on rental cars in the city Phoenix, state Arizona, USA. Find and book a rental car the easy way. When you rent a car from us, there are no surprises when you pick up the car on your arrival. Compare car rental companies like National, Thrifty, Green Motion, Mex, Sixt, Advantage, Budget, Avis, Firefly, addCar, Enterprise, Alamo, Europcar, Dollar, Payless, Hertz, etc. All our prices include free mileage, airport fees, road assistance and obligatory insurances, taxes and fees. Autoprio.com can help you find a cheap car rental and car hire.